December 06, 2012
This customer of mine, Shane has become a friend to me. Initially she was the one who took part in almost all the contests which I held recently.

Let me recall..I first noticed her at my shop. She saw the prize for mother's day which I displayed at the rack. She asked me about it and I told her about our facebook.

She was interested and eagerly joined in the contest. She became winners a number of times. I didn't put the contestants' names as I like to uphold their privacy. But she wanted her name to be written. So I just did that.

Soon a number of people were not happy that she seemed to be getting many gifts from us. They even commented so sarcastically about her that she came in to complain to me. She then requested me to take down her name and she wanted me to ban those trouble-makers.

I held on until they became super sarcastic. I had to ban them. Since the incident, Shane wanted to do something else. She is good in poems and she would like to write poems as comments on my post. I told her she's great and she could carry on writing poem on my shop's facebook.

Recently the boss bought these Christmas decorations and we hanged them under one of the fluorescent lamp. I put this picture as the facebook cover.


Shane then wrote a poem.. 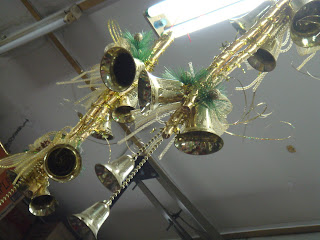 Christmas is here!
Jingle bells...Jingle bells...hear the carolers sing,ding.......ding.......dong..... hear the church bell ring.Christmas trees with ornaments sparkling bright,gifts wrapped with pretty bows, such colorful sight.Dressed all in red with a beard so gray,ho! ho! ho! Santa’s on his way.Laughter of children, they bring so much joy,don’t break their hearts, give them a Christmas toy.In the oven, mum’s turkey’s a baking,scrumptious and delicious, it’s simply lip smacking.Jack standing beneath the mistletoe,kissing pretty Jill standing on her toes. Christmas is here, it brings so much cheer,a jolly good season we hold so dear.

I am glad she did that..
Thank you dear Shane! You have really brighten up my facebook page!