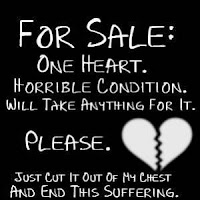 I had a friend when I was in college. He had a Japanese girlfriend who was a staunch Buddhist. He himself was a staunch Christian.
He was very proud of his girlfriend. Since he was a good guitarist, my friend and I became his students. He was a very dedicated and patient teacher. Being kind, he even refused our payment.

We managed to learn classical plucking of the guitar. I still remembered that particular music.

One day, he called me and told me that his girlfriend's parents had disapproved of their friendship. He was so sad and he needed a friend to cry on. So I lent him my shoulder. I consoled him and said:

Don't be sad..there are plenty of fishes in the sea.

The next day, he wanted to see me again. I told him:

I am just your friend.

Do I have the chance to be your boyfriend?

I thought he was being desperate so I said:

That weekend, I was not at my rented room. When I came back, I saw a note underneath my door. Slowly I read the note:

I have written a song for you..

Since then, he didn't call me anymore. I never see him again.
love story