December 01, 2010
Well, I had seen false notes before but I personally haven't received one before. My shop had received 3 false RM50 in total. It happened as the cashiers were not careful enough and they didn't use the scanner.

Since that happened, I had advised my cashiers to be very careful. Otherwise, they would have to replace it.

Ever since the 3rd time, we were very careful. Maybe once or twice, my cashiers did suspect a false note.

But, this afternoon, I received a RM100 note. Immediately, I knew something was wrong. The note was smooth and the shiny strip looked weird.

I showed it to my husband and he confirmed that it was indeed a false note. I had no choice but to return it to the customer.

She said that it was from her employer so I advised her to return it and claim a real one..

I showed her how to detect a false note when we don't have a scanner to do so.. 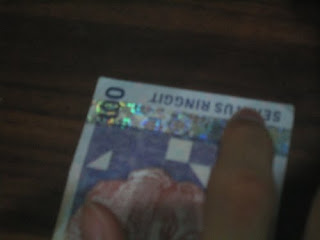 Just gently rub on the words as shown. You can feel that it's a little floated and not smooth.

By the way, the bank told us not to accept notes that are badly abused with writings or drawings.

Even be careful not to accept notes that have shiny strips that came off partly or so..