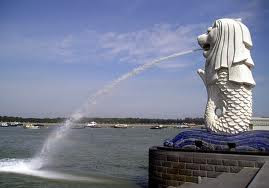 Since I will be in JB, definitely I would not miss Singapore. This time I hope to meet my friend, AB. Since we left school, we lost touch but I managed to call her home in Taiping and her mum gave me her phone number in Singapore. So off I flew there to see her. That was several years ago.

She was married then but didn't have any child. She told me her husband disliked children. At that time my little boy and girl were with me. I told her it's nice to have at least a child.

Never mind about that. Then later we lost touch again. Her phone number changed and I couldn't find her house phone number.

Lately, I met a long lost friend, SK who just came back from Singapore. She had met AB several times when she was in Singapore.

So when she gave me AB's new phone number, I quickly called her. She remembered me but she couldn't recall our meeting several years ago.

According to SK, AB had a stroke even though she was still young but she had already recovered.

A few days ago, I called AB and she told me she would meet me this weekend. I am so happy and I look forward to the day..

Wonder how she looks like now. According to her, she has a son already. Wow, that's great news!